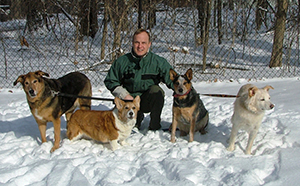 Brett has a life-long passion for animals and the outdoors and has always shared his life with dogs. Brett grew up with animals in the house and all around him, including dogs, cats, birds, snakes, lizards, turtles and amphibians. During college, and after he obtained a Bachelor of Science in Biology, Brett surveyed reptiles and amphibians at NSA Crane, Camp Atterbury and throughout Hoosier National Forest through projects funded, in part, by the Indiana Department of Natural Resources. While considering veterinary school, Brett worked as a veterinary technician at clinics in Bloomington and Colombia, South Carolina. Brett also operated a specialty pet store dealing in captive bred reptiles and amphibians prior to attending law school at Indiana University in Bloomington, where he earned his J.D., cum laude.