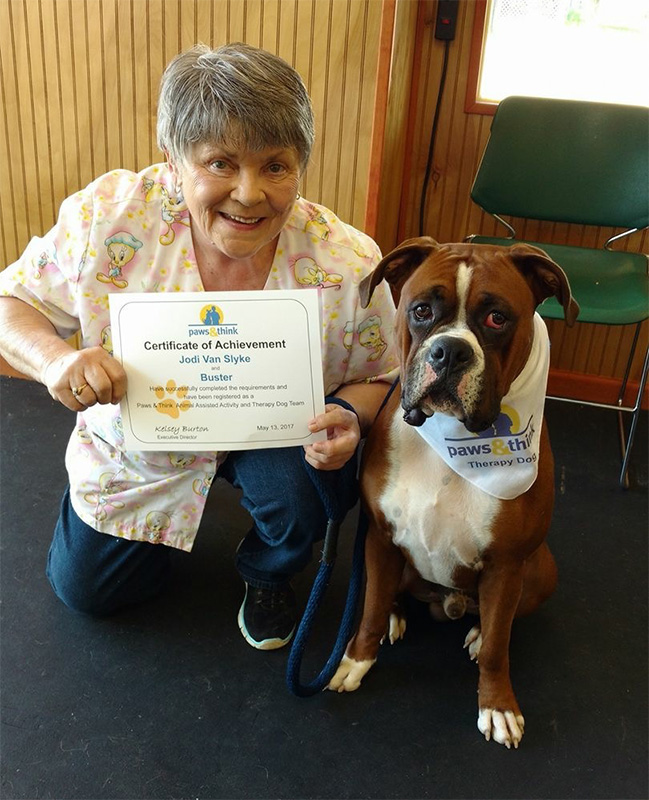 Jodi Van Slyke is the Temperament Tester for Paws & Think’s Youth-Canine programs. She identifies dogs who would be good candidates for the training program and conducts temperament testing at the shelter to ensure the dogs do not display any signs of aggressive behavior that could endanger the youth or volunteers during the program.

Jodi worked for the Indiana State Department of Health for 28 years, serving as their Director of Purchasing and Payables for 12 years. When she retired she knew she wanted to work with animals, so she started her own pet-sitting and dog-walking business. She ran her business for three years before joining Paws & Think in 2003, when she became the Volunteer Coordinator for the organization. Jodi says that she loved Paws & Think’s mission but wanted to be in a role that was more hands-on where she could work directly with the dogs. She eventually became the Youth-Canine Program Director and served as the Youth-Canine Program Coordinator for a time. Jodi was a Corrections Officer for a year and also worked as an Adoption Counselor at Indianapolis Animal Care Services, bringing invaluable skills to Paws & Think’s Youth-Canine program at the Marion County Juvenile Detention Center.

Jodi recalls that one of the last conversations she had with Paws & Think’s founder, Gayle Hutchens, was about the importance of the Youth-Canine program. She promised Gayle that she would help to keep the program alive, and she says that she will stay involved with Paws & Think until she is physically unable to anymore. “Since I got involved, I have been diagnosed with cancer and had open heart surgery, so I really don’t know what it would take to stop me from being a part of Paws & Think,” she says. She is very passionate about the Youth-Canine program and serves as a substitute trainer and helps with the program graduation and evening care in addition to her duties as the Temperament Tester.

Jodi raised five sons as a single mother and currently has 17 grandchildren (soon to be 18). In the past she has volunteered with Paws & Think as a therapy dog handler with her dog Jazz, and she was nominated as Paws & Think’s Volunteer of the Year in 2007. Jodi has fostered dogs since 2007 and currently has three dogs (Buster, Piper, and Cane), three cats (Romeo, Patches, and Lucky, who she hopes to register as a therapy cat someday), and a bunny (Vito). Jodi has volunteered with Indianapolis Animal Care Services since 2007 and continues to foster dogs to help them find their forever homes. She also enjoys crocheting baby blankets and hats in her spare time.